Divava Okavango Lodge & Spa has received a TripAdvisor® Certificate of Excellence award. The accolade, which honours hospitality excellence, is given only to establishments that consistently achieve outstanding traveller reviews on TripAdvisor, and is extended to qualifying businesses worldwide. Only the top-performing businesses listed on TripAdvisor receive this prestigious award. 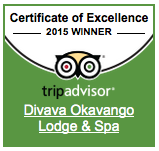 When selecting Certificate of Excellence winners, TripAdvisor uses a proprietary algorithm to determine the honorees that takes into account reviews ratings. Businesses must maintain an overall TripAdvisor bubble rating of at least four out of five, volume and recency of reviews. Additional criteria include a business’ tenure and popularity ranking on the site.

In 2014, Divava also earned this prestigious award. We will keep up the good work, for the same results in 2016!